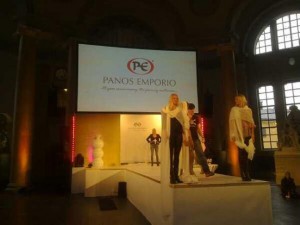 Here’s footage from last Thursday’s Panos Emporio 25th anniversary party in Skeppsholmen, Stockholm.
Finest.se interviews some of the guests to get their thoughts on Panos Emporio, its designer, Panos Papadopoulos, and the most notable models the label used in the last quarter-century (with Elena Paparizou and Rickard Engfors getting nods).
Footage of the anniversary catwalk show begins after the ﬁve-minute mark, and an interview with Panos himself begins around 5’50”.
The video, from Finest.se, is in Swedish, without subtitles.