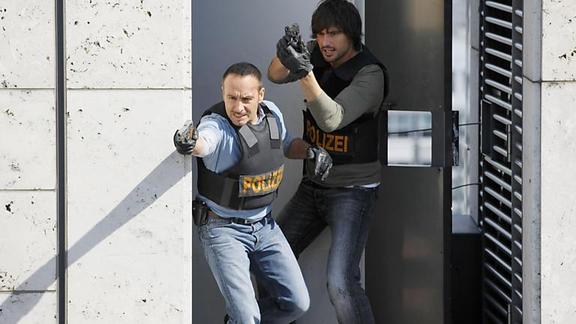 Today marks the 15th anniversary of Alarm für Cobra 11: die Autobahnpolizei, a German show I have followed for just over a half of its run.
I’ve watched it through budget cuts and some naff storylines of late. It’s of some interest to chart the course of the show over these many years. Above, from top: Rainer Strecker and Johannes Brandrup: Alarm für Cobra 11 is made up of a short guy and a tall guy. A stunt involving an anchor and a Ford Scorpio.

The première episode, ‘Bomben bei Kilometer 92’ (1996)
Back in the day, no one believed Germany could do an action series. It was accepted that that was the province of the Americans. An English director of photography was hired for the ﬁrst Cobra 11, and Action-Concept, the company that now produces the entire show, was called in just to do the stunts. Modern fans wouldn’t recognize it: Cobra 11 was a regular German Krimi, there is one nude scene, and the two stars—Johannes Brandrup and Rainer Strecker—have an Audi 100 (C3) and a Ford Sierra, in the pre-product placement days. Slow-paced by modern standards, but then, there are fewer holes in the story. Some similarities are there: a female boss (Almut Eggert) and the pairing of a tall guy and a short guy. The theme tune, by Reinhard Scheuregger, is in place—it is this version that remained till the 159th episode with Gedeon Burkhard, many years later. There seems to be a real difference in the ﬁlming styles of the drama and the action, given that two companies (Polyphon and Action-Concept) are involved. Ten million viewers watch the première on RTL.

Episode 3: ‘Der neue Partner’
Contrary to some belief, actor Erdoğan Atalay, playing Semir Gerkhan, was not there from the beginning of the series. He was hired for the third entry, after Strecker’s Ingo Fischer character was killed off. Atalay looks youthful in his ﬁrst outing, playing the apprentice to Brandrup’s experienced Frank Stolte character—very different to the mature family man in current episodes. This ﬁrst season netted an average of 7·7 million viewers in Germany—numbers that the more recent seasons have not achieved, largely due to increased competition.

Episode 10: ‘Shotgun’, and the formula is set
For the second season, a new lead actor is hired to replace Brandrup. Mark Keller, as André Fux, is brought in; Atalay continues playing the sidekick. Charlotte Schwab, as Anna Engelhardt, is hired to replace Eggert, as the squad’s new boss. She has a secretary, Andrea Schäfer, played by Carina Wiese. Two supporting regulars are added: uniformed policemen called Horst Herzberger (Dietmar Huhn) and Dieter Bonrath (Gottfried Vollmer). Apart from actor changes, these six roles remain constant throughout the series, with a science lab geek (Hartmut, played by Niels Kurvin) added as a regular in 2004, probably with the success of American shows such as CSI.

Episode 32: ‘Die letzte Chance’, and the stuntmen take over
Action-Concept takes over all duties at the start the third season and cranks up the stunts. No longer ﬁlmed in Berlin, the show is moved to its new home base, nearer to Action-Concept HQ in Nordrhein-Westfalen. The stories are still plausible, but you can trace the stunts getting bigger from this point. Keller would see out the third season, with the last episode ﬁlmed in Majorca, to escape the German winter. Unlike Brandrup, Keller’s character is killed off in front of his partner Semir—a trend, sadly, whenever a lead actor exits the show. Above: René Steinke, as Tom Kranich, in his ﬁnal episode (for now).

Episode 48: ‘Höllenfahrt auf der A4’, and the début of Tom Kranich
Long-time fans speak admirably of the pairing of actor René Steinke (as Tom Kranich) with Atalay, and to many, this is the deﬁnitive team, commencing 1999. The stories, at this point, still have some semblance of reality, and it could be argued that the Cobra 11 franchise reached its peak during this era. While the Semir Gerkhan role remains the sidekick, it is maturing, especially with the on–off relationship he has with the secretary, Andrea. The stunts continue to become more impressive, easily beating out anything emerging from weekly American television.
In 2001, requiring more episodes, a spin-off was created, Alarm für Cobra 11: Einsatz für Team 2. Since Steinke and Atalay had reached the maximum working hours under German employment law, two other actors were hired. The supporting cast remained the same, but the spin-off essentially dealt with two other cops—a male and an aristocratic female this time—who worked when the regulars didn’t. The series was successful—5·5 million viewers per episode—but sank without trace.
Steinke, arguably, helped draw a big audience. My female friends all seem to agree that the actor is ‘hot’, rating him more highly versus his predecessors and successors. Above: Christian Oliver and Erdoğan Atalay.

Episode 98: ‘Feuertaufe’, and Erdoğan Atalay is promoted to lead
With Tom’s ﬁancée, Elena, blown up in her Range Rover at the close of the sixth season, he leaves the force. The producers were, with hindsight, fortunate to keep the character alive, rather than kill him off in the same way as Fux. Christian Oliver, as Jan Richter, is the ﬁrst new actor to be junior to Erdoğan Atalay’s Semir Gerkhan, ﬁnally promoted to lead. The dynamic changes slightly as a result. At the beginning of the eighth season, Semir and Andrea are married, in a two-hour pilot ﬁlm, ‘Fur immer und ewig’. The scripts are beginning to show some implausibility, and the villains begin to be more cartoonish.

Episode 126: ‘Comeback’, and Tom Kranich comes back
Richter disappears without trace, leading to the rehiring of actor René Steinke, who has to rejoin the force to help solve the opening crime. It’s not a two-hour pilot this time, but a fairly routine episode about a terrorist bomber. The scripts continue to have a mixture between a traditional crime show and ever-extreme stunts. Eagle-eyed viewers will see an Opel Calibra dressed up with a Mercedes CLK front and rear for storylines that require the car to be destroyed, and Toyota provides extra product placement.
Atalay continues to have his name ﬁrst, and the two characters are now equal partners.
Wiese, leaving the show as a regular, has her Andrea Gerkhan character become a full-time mother. Martina Hill is brought in, after guesting at the start of the 10th season. Episode 158: ‘Auf Leben und Tod’, and the guy from Kommissar Rex
When Steinke wishes to leave the show a second time, the producers decide to kill him off—so a second comeback is now out of the question. He comes back for the start of the 11th season to ﬁlm his death scene, and Gedeon Burkhard, from Kommissar Rex, becomes Semir’s new partner. The on-screen relationship is more strained initially, and Burkhard’s Chris Ritter character is the ﬁrst chain-smoking lead in the series. Ritter is used to undercover work, so the stories become grittier and darker, with the emphasis on characterization. A new introduction and rearranged theme song are introduced, and depending on episode, either Burkhard or Atalay gets top billing.
Hill also leaves, replaced by Daniela Wutte as Susanna König.
A disturbing development begins in production. While BMW and Mercedes-Benz now supply new cars to be written off, it’s during the Burkhard era that crashes from earlier episodes are inserted into the action.
And Burkhard’s presence is limited. Claiming that he wanted to be closer to his daughter, the actor quits. Chris Ritter is also killed off at the end of the 12th season, this time by a Dutch criminal, and, like Kranich, dies in the presence of Semir Gerkhan. Above, from top: Ben Jäger (Tom Beck) and Semir Gerkhan (Erdoğan Atalay) can see the sky out of Semir’s BMW 3er-Reihe. In ‘Die Braut’, aired March 12, 2009. A new Mercedes-Benz C-Klasse police car rolls in the opening chase in ‘Der Anschlag’, the season première aired September 2, 2010. And just to show how outrageous the stories have become, that is a nuclear warhead Semir has disarmed, in ‘Codename Tiger’, aired April 22, 2010.

Episode 180: ‘Auf eigene Faust’, and the Tom Beck era
With the introduction of new co-star Tom Beck, as Ben Jäger, the series takes on more fantastic elements. The action sequences pay tribute to the likes of Michael Bay—not exactly the best role model—and some very obvious inspirations from American ﬁlms begin appearing. Lethal Weapon 4, Live Free or Die Hard, Assault on Precinct 13, and Bay himself (a US air base is named after him in one episode) are referenced, and the villains become even more cartoonish. The early episodes are transitional, but it’s discovered that Beck has good comedic timing, so a few more scenes are played for laughs.
The show has become more of a caricature, though the occasional good story still surfaces.
Schwab leaves the show, replaced yet again by a female boss, played by Katja Woywood (who, in fact, guested on Team 2, but played another character).

Episode 219: ‘Bad Bank’, the 15th anniversary episode
Which brings us to 2011 and the 219th story (I’ve used the production order, not the broadcast order). It’s supposedly the 15th anniversary episode. ‘Bad Bank’ sees Ben blinded in the opening chase, though his blindness heals very rapidly. A villain has such bad aim that he fails to shoot Semir despite the use of an automatic weapon, while Semir’s handgun blows up a helicopter. People move in slow motion to be cool. The action is passable though, in a recession, it’s not as extreme as it once was. There’s a rumour that Dietmar Huhn’s character—the second-longest-running in the show, after Atalay’s—will be killed off.
Atalay believes the show will go on, although he has a ﬁlm to shoot as well as his Cobra 11 episodes this year. The viewers seem to like Beck, and 5·5 million are still drawn to the show each week in Germany. It remains the top-rated show in its timeslot, beating off reality TV programmes. However, as a long-time fan, I’m hoping for some better stories or stunts—as there’s a feeling that Alarm für Cobra 11 peaked a while back. The numbers certainly did: ‘Bad Bank’, an exercise in style over substance, netted only 5·07 million against strong competition—though that’s up considerably from ﬁgures a few years ago that had Cobra 11 stuck between 3 million and 4 million. It does seem to be recovering its market share.
On that note, I wish the show a happy birthday—15 years and 222 ﬁnished episodes are nothing to be sneezed at. It’s been renewed for autumn 2011, which is no surprise, given it continues to bring in the numbers, especially the crucial 14–49 age group. It’s brought us many good memories and continues to be fun, escapist viewing on RTL and, more recently, RTL Now.