Above: Alber Elbaz and Lucas Ossendrijver: Lanvin’s artistic director and menswear head designer at the Palais de Tokyo in Paris. Below left: The author and Alber Elbaz. 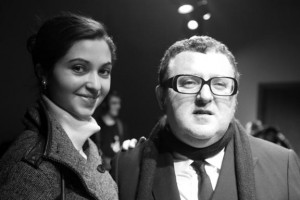 ‘I WANT LANVIN … not flowers!’
As soon as Lanvin announced its collaboration with Hennes & Mauritz (H&M), people were already preparing to get their hands on one of the most popular names in the fashion industry.
Lanvin fully succeeds in creating originality, elegance and a lovely fit for the wearer.
‘When we talk about a man, we generally say that he is sexy, cool and hip. And what we wanted to do is to use the word elegance,’ said Alber Elbaz when discussing Lanvin’s autumn–winter 2011–12 menswear collection.
On January 23, 2011, Lanvin presented its new season’s collection at the Palais de Tokyo in Paris. Lucas Ossendrijver, the head designer of Lanvin menswear, alongside Alber Elbaz, the label’s artistic director, created the original, elegant and stylish looks to fit a range of different occasions. Considering the Palais de Tokyo is a building of modern and contemporary art, it was a perfect place to welcome Lanvin’s collection. The new designs illustrated sophistication in a very modern outlook.

As the lights dimmed down and the show began, models strutted down the runway with self-assurance, confidence and poise, as they showed off the display of Lanvin splendour. The music made its way into people’s ears as the new collection made its way into people’s hearts.
A carpet-padded runway added an extra touch of glamour and style. Elbaz discussed the idea of the runway: ‘We have taken a place that is very industrial …Yesterday, at one o’clock in the morning, we called the production and we wanted to take the carpet out, but then we reconsidered it. We thought that it was not maybe the time because it was too late; I would have taken it out if I could. Finally, I was very happy that we didn’t do it at the end; today I saw it in a different perspective …’
When attaining Elbaz’s personal perspective about this particular collection, he said, ‘For each woman there are ten different women … even in men there consists ten different men … and that is what this collection is about. It is not only about one person with one type of haircut with one look, but these are different occasions and different personalities. [The different designs represent] individuals and very personal [looks].’
Chic and elegant were not the only words to define the new collection; it was also a combination of sophistication with an “edgy” appearance. The music created such an effect; from slow and calm music, a direct switch to rock was constantly made. It created a perfect mix, hyping up one’s adrenalin and constantly yearning for more.
Lanvin’s creations have evolved over the years, following what it sees as a man’s various personalities. Elbaz explained to us the growth of the fashion house and what it has come to mean over the years: ‘When we began at first, the image was of a man who was very specifically created being emotional and poetic, and then we advanced [creating] man as more linear, a little more edgy and a little cooler … Then we wanted to go back to our roots: the essentials of where we started. Finally, we realized that it is not one outfit for one man but it is clothing for different men … here we wanted to show the different façades of a man.’
Many of the models were elegantly suited up as they strutted down the runway accompanied by hats slightly tilted onto one side, creating a cool and fresh effect. An outfit accompanied with a simple bow or necktie tucked-in underneath a sweater portrayed a certain chic image. Colours ranged from cool and fresh yellow to dark and daring black. An array of styles to fit anyone’s taste and desire. Simplicity was also an important aspect: with a pair of leather gloves and a tightly wrapped scarf, allure and appeal result. Elbaz described the look: ‘For men it is less of a story about image. It is more about desire and emotions, but, at the same time, it also should be modern and relevant for the men of today.’—Lola Saab, Paris Editor, Lucire