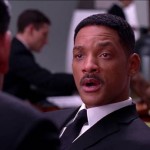 Men in Black 3’s ofﬁcial trailer has been released by Sony today, featuring stars Will Smith and Tommy Lee Jones, along with Josh Brolin and Emma Thompson.
A time-travel plot sees Smith’s Agent J character forced to return to 1969 to uncover why Jones’s Agent K has died.
The third instalment in the Men in Black franchise comes 10 years after the last ﬁlm, released in 2002. The new movie comes out on May 25 in the US.
The budget has been reported to be in the region of US$215 million, twice what the second ﬁlm cost.