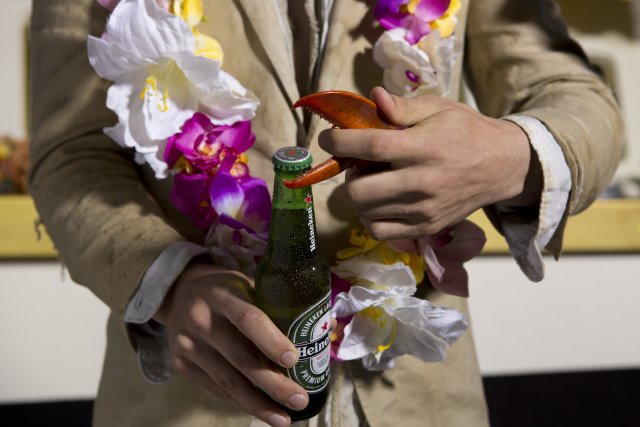 Heineken has had a series of very elaborate commercials over the years, and is willing to pay top dollar to make them. Several years ago, the Asteroids Galaxy Tour performed ‘The Golden Age’ to a stranger who arrives at a bar and performs various feats, from shooting a basketball hoop to magic tricks and kung fu. In 2012, a spy-themed commercial grabbed headlines, again with the lone stranger who stumbles into a party situation, this time on a train that happens to have Daniel Craig, Bérénice Marlohe, and Joseph Wiseman (in movie clip form) along with snippets of ‘The James Bond Theme’. It was a tie-in to that year’s James Bond flick Skyfall, for which Heineken had paid $45 million (it was not the first time Heineken got involved in the spy genre—they managed to get Austin Powers on board in 1999). The commercials are characterized by exaggerated colours, a catchy soundtrack and cameras going between sets following the star to give a sense of scale.
There are big bucks involved in alcohol advertising, especially to give the products proper differentiation. Heineken signalled that it was the choice of a cool urban everyman, who is also an outsider who finds himself in a novel setting, but who wishes to have effortless oneupmanship despite the unfamiliar surroundings. The Dutch beer brand calls it its Legends series. However, the 2014 campaign has a little twist.
The Odyssey, which débuted in January, addresses some of the criticisms of previous campaigns, namely the lack of ethnic diversity in the hero. The premise this time: ‘every man is legendary at something’. Consequently, the Heineken man is not one protagonist, but twenty, each of whom plays the character at one stage during the commercial. Only in the last few seconds are all 20 shown together. It’s a different approach to the idea of the everyman.
Heineken purposely used non-actors in the lead role, found in an open casting. They had to perform everything from a limbo contest to doing a perfect dive, to dancing in a conga line and break-dancing on stage.
Thematically, it ties in to the previous commercials with a catchy soundtrack (‘16 Toneladas’ by Noriel Vilela) and colourful art direction. The large set, was built on a car park by a beach in Barcelona, and included a 10 ft pool, necessitating a special diver who could handle the shallow depth.
The commercial was created by Heineken with ad agency Wieden & Kennedy Amsterdam.
Sandrine Huijgen, Global Communications Director for Heineken, said, ‘Our Legends campaign is an entertaining homage to our drinkers and their legendary behaviours. We are convinced that many of our drinkers out there have at least one legendary talent. They just need a chance to show it to the world. This is why we decided to offer our next film, The Odyssey, as an opportunity for 20 young men to show us what they’ve got. And they are all legendary.’
The commercial will air via both broadcast and digital media and is 2·5 minutes long.
A tongue-in-cheek response to fake comments on air doubting the authenticity of the commercial gave those who appeared a chance to show their talents—although with reliance on special effects.